by The Underscore Orkestra 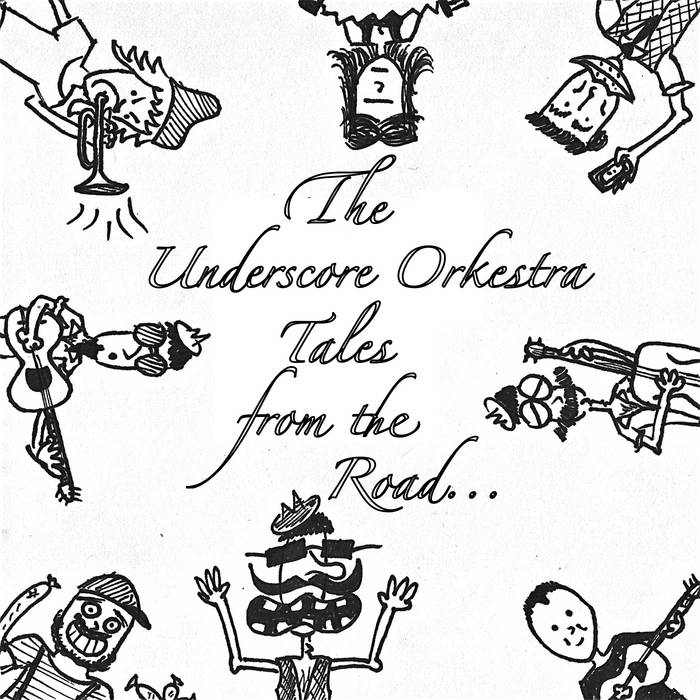 Creative Commons License
Tales from the Road... by The Underscore Orkestra is licensed under a Creative Commons Attribution-NonCommercial-ShareAlike 4.0 International License.
Based on a work at www.TheUnderscoreOrkestra.com.

Tales from the Road... was written, arranged and recorded in 2013 during an epic 8 month tour to Australia, New Zealand, Across the whole US, Ireland, Belgium, France, Spain and back to the US. It was recorded in several different Studios. When ever we had the time and space we put down a track or two.
Brief Tales of Each Song
1) Irish Ferry (Remember The Oscar Wilde),
Conceived while playing on a ferry between Ireland and France.
2) It ain't Right,
An old Stuff Smith song thats a crowd pleaser and one of our favorites.
3) Americana Jam,  While waiting for a ferry between the South Island and North Island of New Zealand we were eating a gourmet dinner at a restaurant we were playing at in Picton, During dinner this tune came about. That night, not having a place to stay, a fisherman gave us his apartment that was above the bar, he slept on his boat.  Crazy, Amazing World!
4) Beranche Hot Springs,
We had a Balkan Folk Dance coming up and wanted to have a song in this Rhythm of 12/8, inspiration struck one morning while camped out at a hot springs out in the middle of New Zealand. Other than a couple Maori who showed up in the morning we were the only ones out there.
5) Patrice's Klezmer,
Written on a Bicycle tour from Marseille to Rome. Our good friends Patrice  and Rita are amazing people, they put us up in their apartment, 11 of us in a one bedroom apartment, and they have an amazing permaculture farm outside of Marseille. This song is dedicated to them
6) Sail boat,
An ole' trad jazz song. Amazing vocals by Miss Willo Sertain.
7) Black Sea 7,
As the title suggests this is a traditional song from the Black Sea in 7/8. Many countries claim it as their own, we have given it our own flair and only hope we've done it justice in some of its home countries.
8) Hobbiton (The Triplets of Hobbitville),
We had the good fortune to be the first band to play at the Green Dragon Pub at Hobbiton.  This song was written after that magical experience while sleeping in a Shire like environment somewhere in New Zealand.
9) Shanghai Pancakes,
While  on a layover in the Shanghai airport in the wee hours of the morning this song came to life. We took the cheaper flights to Australia which brought us thru Shanghai, about a 50 hour trip, but with the delirium creativity sometimes strikes.
10) Andros Ballos,
Andros. Our arrangement was created while collaborating with some amazing Belly Dancers, during the solo section imagine a beautiful dancer responding to its crescendos and pauses and playing with the melody thru her body. A video of this happening is available on our album The Extraordinary Adventures of....
11) Egyptian Ella,
A trad jazz tune. Our arrangement was inspired by time spent in New Orleans.  This was a favorite while busking thru out Australia, New Zealand and Europe. saxaphone. We spent many hours jamming together. While in the kitchen of one of the stalls we came up with this song one evening.
12) Luminate (Gael's Revenge),
Luminate is an amazing Music and Dance Festival that happens in New Zealand. We were fortunate to be a part of this. We met  an amazing Frenchman who plays a tiny saxaphone. We spent many hours jamming together. While in the kitchen of one of the stalls we came up with this song one evening.
13) Government Housing,
While at the Illawarra Folk Fest in Wollongong Australia, Tom and Lucas sat contemplating our predicament of living in the  camo green artists tents. This little ditty came from the amazing song writing duo of Tom and Lucas. Each of us wrote our own lyrics to talk about our time in Oz.
14) New Town Klezmer,
In Sydney Australia there is a neighborhood called New Town. While waiting for a friend in the square of the hub this song came about. Dedicated to the fine folks of New Town.
15) Versipellis Solo Piece,
A Belly Dance and Music extravaganza was put on in a black box theater near the train tracks in Portland Oregon. This is one of the original pieces from that show. It was done on a 5 string violin. Imagine the dancer gliding and slithering around on the floor in the beginning and virtually flying thru the air by the end.

The Underscore Orkestra plays a blend of Balkan, Klezmer, Hot Jazz, Americana and Swing music, both Original and Traditional. They often incorporate live Belly Dance or other performance art into their shows.

They are based out of Portland, Oregon and have been touring the US, Canada, Europe, Central America, Australia and New Zealand for the past 8 years.

Bandcamp Daily  your guide to the world of Bandcamp